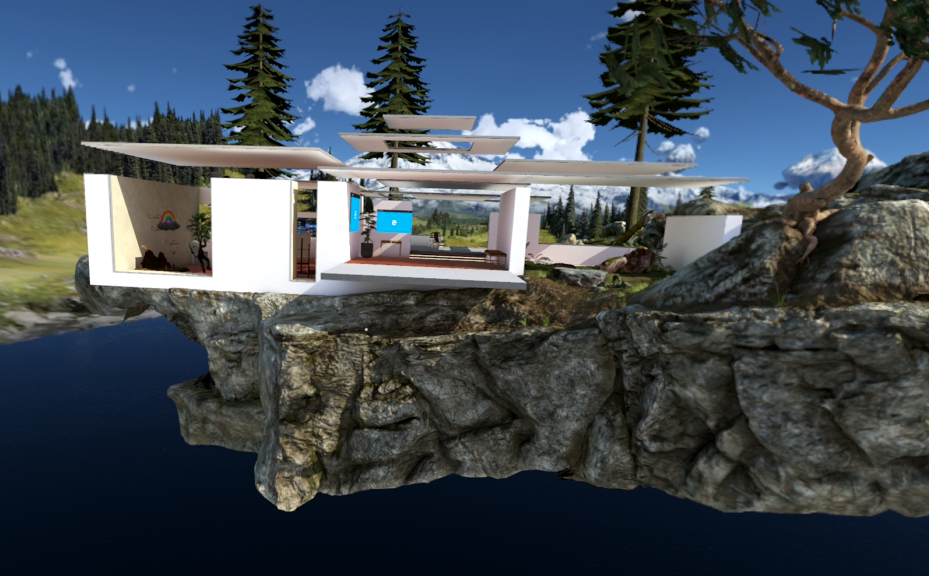 The developer’s editor VR (Virtual Reality) hardware was announced at Build 2017 however since the announcement very little information has been released. The dev kits started to ship two month ago; this article is my impression of the hardware and software based on the Acre Developers Edition headset. As this is a developers release, you would expect some rough edges and “issues”.
The instructions for getting the headset up and running are straightforward, they equated to open the box and plug it in. You do need a spare HDMI and USB port for the headset (which meant that I needed to move some cables around on my desktop as I only have one HDMI port, so I swapped my primary monitor to DVI and plugged in the headset into the HDMI port).
Once plugged in the headset windows installed some new software and drivers and started the headset calibration. The headset calibration is a simple process, hold the headset at head height so that the headset can detect the floor and then trace the movable space. 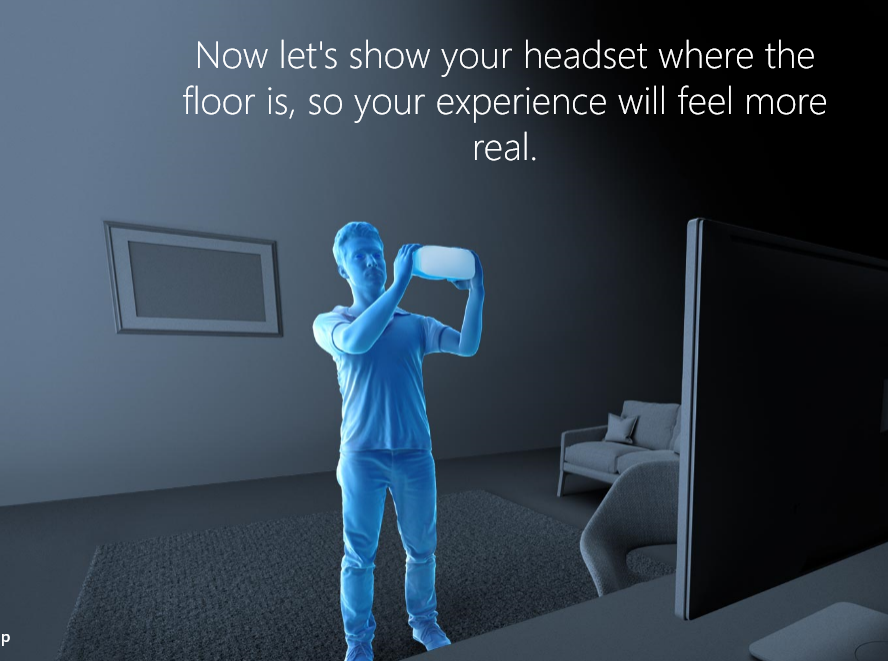 The first calibration to detect the floor went off without a hitch however the headset failed to correctly detect my path around the movable space, insisting that I kept crossing my path. 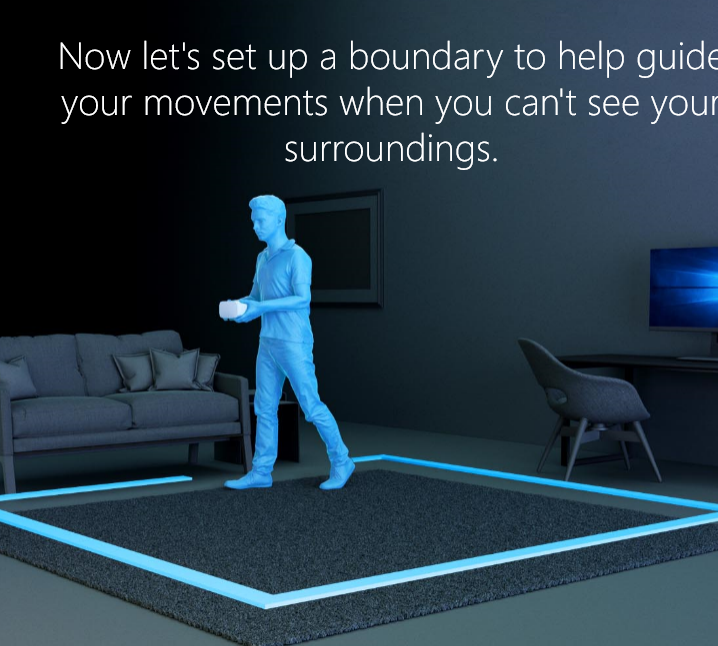 I do not have a lot of space within my office, so I retested the path mapping in a more open area, again results weren’t great as it took several goes to get the headset to trace the space correctly even with few obstacles.
Once calibrated it was time to plug in the headphones/microphone, this was probably the hardest part of the process, the headphone jack is positioned in a very difficult to reach location, I had to consult the instruction diagram several times to confirm that I was in the right area where the headphone port was located (it’s a black hole on black plastic on the left corner on the back of the viewer), once found inserting the headphone jack also proved a tricky operation.

Although it is possible to use the headset without a microphone (using just headphones), you lose one of the best features of windows, integration with Cortana. Once the microphone is set up you can select items in the VR world by saying “Select” and Cortana will do the rest. It is also possible to use Cortana and voice commands to interact with the in-world items and carry out additional actions. Without enabling Cortana selecting items is executed by pressing A on the Xbox controller, (note that the developers’ release does not come with the “flying saucer” paddles that will ship with the release units, so all my testing was carried out with Xbox controller).

Currently, there are only a very limited number of apps available from the Microsoft Store.

The Cliff House application is your VR base, consisting of a relatively small set of rooms within a larger alien landscape, although it’s possible to explore outside the house the outside space is not particularly impressive..

The rooms within the house can be customized by placing apps or “holograms” within the environment, for example, you can pin the outlook mail client to a wall so that you can monitor emails or the Edge browser to view the internet or Media Player to watch a video. 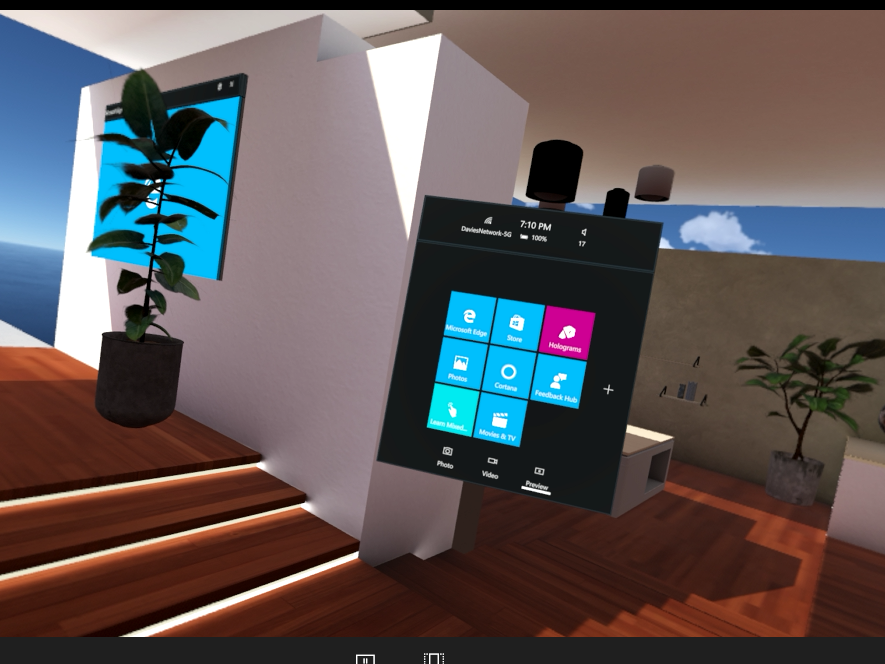 Holograms can be downloaded from the store and can be pinned within the VR environment, most of the holograms loop a short animation. The delay for the animation starting can be very “hit and miss”, standing next to a hologram when it suddenly springs into life for the first time can be a significant jump scare.

The first release of the Cliff House application had some significant problems and would not run from more than 20 min without resetting itself, subsequent updates have significantly improved the stability of the app, and I have successfully run the app for over an hour without any resets.

The second application is Holotour, a VR tour of Rome and Machu Picchu, this app starts to show the power of VR to immerse the user within an experience.

Although viewing the location is from a fixed vantage point, Melisa your digital assistant will point out areas of interest which you can select to provide additional information. I particularly liked the overlay of holograms within the space to show buildings as they would have been hundreds of years ago. The app does experience significant tearing of the VR scene in several locations, and at times Melisa stopped responding to voice commands. Despite being the best experience so far with my VR headset, it proved impossible to capture screen grabs of the application, when I switched applications the Holotour app froze.

The external case of the headset never became hot however the viewer space does become uncomfortably warm. After 30 min of continuous wear, I needed to lift the headset every 10 min to wipe the sweat from my eyes and face. The Acer headset is light but has a sturdy construction, the padding around the headset cut out light but was flexible enough that I could comfortably wear my glasses while using the headset.

Having used a number of different VR headsets how does the Acer compare? Setting up the Acer headset was a walk in the park compared to the none Windows Mixed Reality VR headsets (even with the available space mapping issues and the headset jack position), from opening the box to getting the headset calibrated and working took 10 min (not including moving cables and repositioning my dev machine in a more open area).
My previous experience with a VR headset was with an Oculus Rift which took over 2 hours to set up and which needed almost continual adjustment. During my time with the Rift, I also experienced motion sickness which I attributed to the VR space continuing to move when I stopped moving. Although I have worn the Acer hardware for longer periods than the Rift over the last two months, I have never once experienced motion sickness with the Acer hardware.

So despite the media hype on VR 12-18 months ago adoption has been slow, the question is what would drive adoption on this technology to the broader market.

Cheaper hardware, although the cost of VR units has decreased over the last year, they have still not reached a price point where the hardware is widely adopted. It appears that one of the goals of the Windows Mixed Reality initiative provides a common platform which allows different companies to produce headsets at different price points which should drive adoption and decrease costs.

Experiences, so far the software created for VR headsets has mainly been for video games and although video games are a large market VR games has continued to be a small and niche subset. The VR games market has not been helped by a large number of poor quality titles and shovel wear that has been released to cash in on the new technology. A number of AAA games companies are starting to experiment with VR versions of popular games, however many of these titles have exposed the limitations on how we interact with the VR spaces and environments.

The potential market for none-game VR experiences is large however the current market is mainly untapped with only a very small number of titles being released. It is interesting to see that the demo apps available in the Microsoft store are not games.

Microsoft and its Windows Mixed Realty partners have a platform to start to drive adoption of VR outside of the games market, and it is going to be interesting following the Windows Fall Creators update in October 2017 the experiences companies build on top of this technology.