I rarely purchase version 1 hardware (or software), I tend to wait for the reviews to come out, then the first service pack or hardware update to be released and only then I consider whether I really want the item. I had looked at a couple of other fitness bands and has almost purchased one of the ill fated “Up” bands but most of the fitness trackers did not support my Windows phone or were lacked support for one of the key metrics I wanted to track (movement, heart rate, exercise and sleep).

In October 2014 I was reading an article on theVerge when I noticed a new news story. A fitness application from Microsoft had appeared on the Apple store which indicated the imminent release of a new fitness tracker from MS, a quick scan of the article lead me to the Microsoft Website for the MS Band and soon after I had purchased my MS Band from the MS Store (including “complete cover”).

A couple of days later my Band arrived, my first thought was that the strap was a bit square, although I assumed that it would flex to fit the shape of my wrist. Pairing my Band with my Windows Phone proved a bit hit and miss in getting the two to initially connect via Bluetooth, however once they had connected I everything sync’d and I had no further issues.

My assumption that the Band would flex to better fit the shape of my wrist was incorrect. Although the strap has flexed the LCD face is slightly wider than my wrist and as there is no “hinge” between the LCD and the strap it does add significant size to the wrist where I wear the Band.

This difference in size on the arm with the Band does mean that have I caught the Band on several doors and cupboard shelves within the couple of weeks. Despite several collisions the LCD surface has proved to be scratch resistant.

I had been wearing my Band on my right wrist (as recommended) with the LCD on the outside of my wrist. I did try wearing the LCD on the inside of my wrist (as the web site recommended to keep any text messages private), however the thickness of the Band made typing for long periods uncomfortable. Then one day I developed a rash on the skin under the Band, I did my usual and ignored it, however the following day I had to remove the Band as the skin was itching and uncomfortable. A couple of days later I tried wearing the Band again only having to take it off again after several hours. Rather than leave the Band off for an extended period, I started to wear it on my left wrist. Although the rash on my right wrist cleared up after a week from this point on I continued to wear the Band on my left wrist with no issues.

Sitting in a meeting I noticed that my Band was loose, which is odd as the strap had always been on the tight side.

When I looked down at I my write I noticed this.

Damn, the strap had snapped at the connection between the strap lock and the strap. First thought was that I have only had this for three months so it must be covered by warranty. Turns out when I contacted MS support that the strap is not covered by the standard warranty. However as I had purchased the “complete care” package I could get a replacement. So I duly waited for the return box to arrive so I could ship the broken Band back to MS. After a three week wait my new Band arrived however despite following the instructions it would not connect to my phone. After some fiddling around I realized that although the original Band was not registered with the phone app, it was still registered with the phone blue-tooth. Deleting the blue-tooth entry for the old band allowed the new Band to sync and I was up and running again (literally). 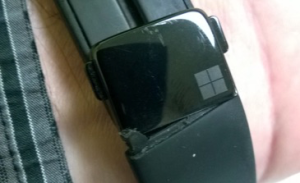 I didn’t want to wait another three weeks without my Band so I took it to my local MS store (must admit that when the Band broke the first time I did not know that there was a MS store in San Diego). 5 min after talking to local Band expert and having my wrist measured I walked out of the store with a new bigger sized Band with an assurance that my problems were caused by the Band being to small for my wrist. I have to admit that the large Band size does not fit my wrist quite as snugly as the medium version and sometimes feels loose, however I have yet to see a repeat of the strap problem.

We are rapidly approaching my Band usage 1 year anniversary and I can say that overall I am still happy with my purchase. I still wear it almost all the time (only taking it off when it needs a charge and when I shower), so it has proved useful enough not to end up stuck in a drawer after 6 months.

So the Band is not just a watch and as the driver for my initial purchase was to measure my sleep and movement what have I learned from almost a year of using the Band.

I am surprised how far I walk I in a day. Walking my two dogs in the morning, two laps round the office car-park at lunchtime and an evening walk with the dogs gets me over 5000 steps per day.

Well my sleep patterns aren’t as bad as I thought, even though it sometimes feels like it has taken me a long time to fall asleep, its probably been on average 30 min. A software update does allow the Band to detect when I fall asleep (rather than me having to put it into “sleep” mode), however this feature does seem to be a bit hit and miss. It will detect when I fall asleep after I turn off the sleep mode and the alarm (normally on the weekend), however it has never detected that I am asleep when I fall asleep on the settee in front of the TV.

I was also surprised how little my sleep patterns are disturbed when I travel and am suffering from jet lag.

If you had asked me before I purchased my Band how many times I went to the gym, I would have said 3 times a week, based on the data from my Band I clearly only go twice a week.

Although its not necessarily the fault of the Band its easy to get caught up in the vanity metrics that the Band is generating. I walk 5000 steps, however there are large sections of my day (when I am sitting in meetings) where I am stationary, I really need to ensure that I move around at regular intervals.

Apart from issues with the Band snapping (twice), I have been very happy with the MS Band, this is due to the excellent MS support and MS Store staff, who were extremely helpful. I am planning on purchasing the next version (possibly due for release in October 2015), however I need a new phone so my Band purchase will have to wait for couple of months.

3 thoughts on “A year with MS Band”